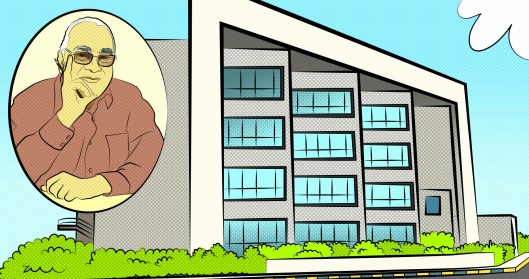 Born in Karachi in 1935, Habib Fida Ali, who passed away on January 7, was among Pakistan’s foremost architects. He studied at the Architectural Association School of Architecture (AA) in the 1950s and was the first Pakistani student there. After returning to Pakistan, he worked with the American architect William Perry, before beginning his own practice in 1965.

In the years that followed, Habib Fida Ali became an icon in his own right; his work was visible across Pakistan and his portfolio included a diversity of buildings ranging from schools, mosques, offices, malls, hotels and residences, including the National Bank of Pakistan, the CAS School, The Forum, the Burma Shell Building and LUMS. Habib Fida Ali was also the recipient of several awards over the years for his work. END_OF_DOCUMENT_TOKEN_TO_BE_REPLACED

While truck art has been around for quite a while, it is only recently that this quintessentially Pakistani art form has found its way into Pakistan’s high-end couture, the collections of web-based websites that sell everything under the sun, as well as street fashion.

Truck art, characterised by vibrant colours, borrows various elements from different regions of Pakistan, including cut mirror work indigenous to Sindh and Balochistan, portraits of popular film actors, not to mention the picturesque mountainous terrains of the northern areas.

Here is how truck art is being used to up the glam quotient in ensembles:

Clothing. Embroidered motifs of Lollywood and Bollywood actors, exotic animals such as peacocks and serpents, and vibrant natural elements such as waterfalls and flowers are increasingly being used in kurtis and T-shirts. Cheekier versions include the kohl-lined eyes of a woman coupled with lines of ‘truck poetry’ including ‘dekh magar pyaar say’. Bright coloured tassels and small metal bells (similar to ghungroos) are often used on hemlines to add drama. END_OF_DOCUMENT_TOKEN_TO_BE_REPLACED

Connected to Lahore’s city centre via Ring Road, Shahdara – or the Royal Pathway – is a suburban neighbourhood located on the northern banks of River Ravi. During the Mughal rule, it served as the entrance to Lahore. 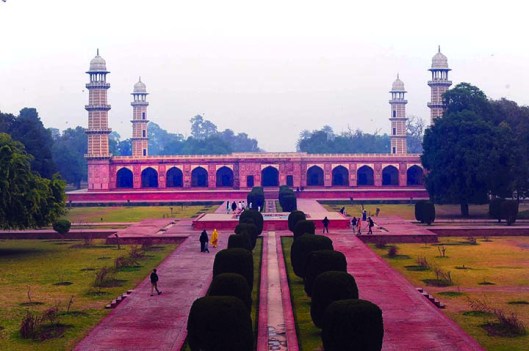 The resting place of the royals… Historical landmarks continue to stand tall in Shahdara, the most well-known of which is Emperor Jehangir’s Tomb. Its exterior is adorned with mosaic, red sandstone and decorative marble. You can enter it through impressive stone gateways that are embellished with frescoes and ghalib kari , which lead into a square enclosure, the iconic Akbari Serai (Palace of Akbar). To its west is the red sandstone mausoleum of Empress Nur Jehan with a cenotaph of Ladli Begum, her daughter. The tomb of Asif Khan, Noor Jehan’s brother, is also located there; it is an octagonal brick structure layered with and blue tiles. 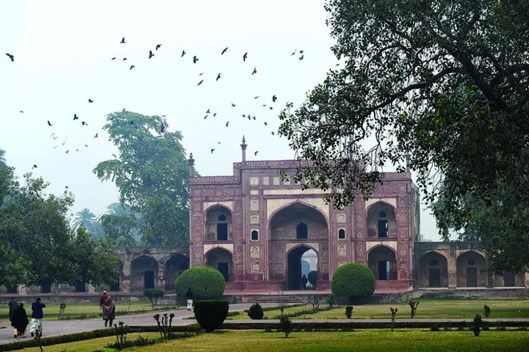 Even more attractions… In addition to the aforementioned structures, Shahdara is also home to Kamran ki Baradari, a summer pavilion built by Kamran Mirza, son of Emperor Babur; it has two-storeys and 12 columns with arched balconies. Remember, a sight-seeing trip to Shahdara is never quite complete without partaking signature Mughlai dishes such as malai tikkas, murgh cholas, pulao and haleem at one of the many eateries there. 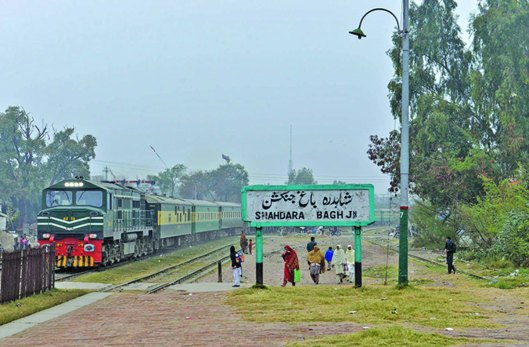 The Shahdara Bagh Junction is a crucial connecting point

A touch of modernity… Over the years, modern utilities and amenities have made life convenient for residents. These include quality educational institutes, healthcare facilities, shopping malls, sports complexes and plenty of green spaces. Furthermore, the construction of two railway stations – Shahdara Bagh and Shahdara Town – ensures improved connectivity to the rest of Punjab.

The real estate take… Primarily a residential area, property options in Shahdara are limited to small houses, constructed decades ago. Commercial property options include standalone shops and makeshift pavement stalls. Due to its distance from the main city, demand and prices of property have remained relatively stable over the years.

In a nutshell… Despite the hints of modernity in the form of well-developed road networks and infrastructural developments, Shahdara remains one of the most prominent reminders of Pakistan’s regal, historic past. n

First published in the DAWN National Weekend Advertiser on August 14, 2016.

International Women’s Day (March 8) is a good time to acknowledge the achievements of notable women from around the world. One such woman is renowned architect Dame Zaha Hadid, who became the first woman to be awarded the Royal Institute of British Architects (RIBA) Gold Medal, the UK’s highest honour for architects last month. Although two other women – Ray Kaiser Eames and Patricia Hopkins – have been previously honoured, they were presented the medal in tandem with their husbands. END_OF_DOCUMENT_TOKEN_TO_BE_REPLACED

The Chinese New Year will begin tomorrow, February 8, and interior decor experts predict that Colour Feng Shui – the ancient Chinese art of using colours to ensure physical, emotional and spiritual well-being – in homes will be increasingly employed in 2016.
To ensure that your home exudes harmony, keep the following Colour Feng Shui principles in mind:

Bedrooms are the go-to places to rest, relax and rejuvenate; therefore, choose browns or muted pastels for walls, carpets and curtains. As fiery red and bright yellow heighten our senses and black and grey tend to be depressing, it is important to strike the right balance between these shades to ensure restfulness. For children’s bedrooms, opt for sage green and pale blue as bright colours – such as orange – can induce aggression. END_OF_DOCUMENT_TOKEN_TO_BE_REPLACED

Born in Jaipur in 1924, Dr Khan’s career spanned over 70 years and began at the Agriculture Department in Kabul; in 1947, he shifted to Pakistan permanently, where one of his first undertakings was the establishment of the Horticultural Society of Pakistan in 1948.

A staunch advocate of women’s empowerment, Khan strongly believed that women would play an instrumental role in increasing awareness of and broadening the scope of horticultural activities in Pakistan. His unrelenting commitment to this cause resulted in the establishment of the Ladies Horticultural Club in 1964. END_OF_DOCUMENT_TOKEN_TO_BE_REPLACED 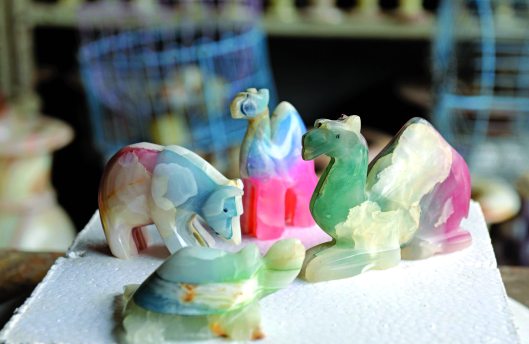 If you drive down Syed Atif Barelvi Road, past Sir Syed Girls College and Usmania College and turn left on to Mangophir Road, you will be assaulted by dust, fumes and noise from grinding and polishing machines. This is Karachi’s Marble Market – packed with shops selling onyx, marble and granite that line the kitchens, driveways and homes of both the well heeled and the middle income residents of the city. 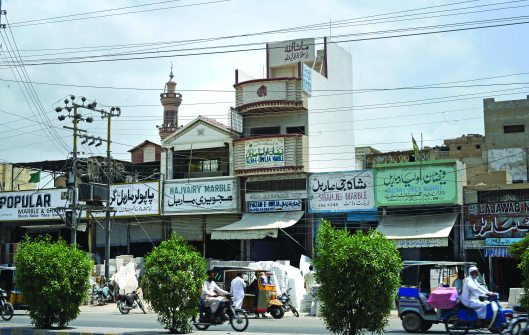 Commercial transformation… Old residents of the area say that the Market was initially a cottage industry with dealers selling marble out of their homes. Over the years, these homes were transformed into shops and hence the market emerged. Large slabs of uncut stone including Indus gold, black and gold, verona, tervera, tippi and countless other varieties of marble and granite now lie outside the shops, waiting to be cut and polished. 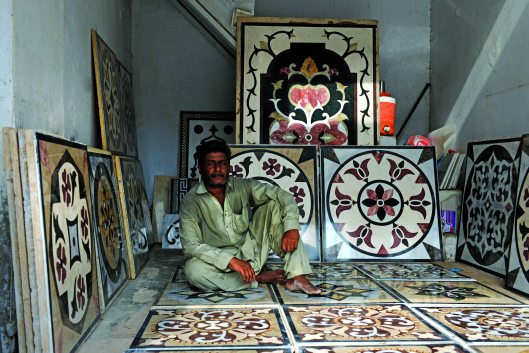 Marble, motifs and greenery… Besides marble, the Market also houses shops that stock ceramic and porcelain tiles and stunning tile motifs, sold at a fraction of the price than in the more up market shops on 26th Street in Defence; you can also find hardware shops dealing in kitchen and bathroom accessories such as sinks and faucets, as well those selling marble handicrafts. For a quick bite, stop at one of the many eateries there, followed by a stroll at the lush green Fatima Zehra Park. 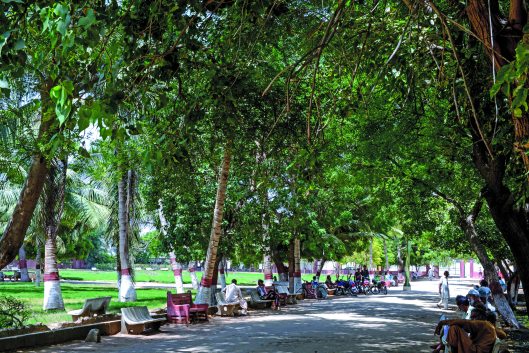 The real estate take… Marble Market is completely built-up and vacant plots are therefore no longer available. Commercial property options are restricted to standalone shops; property is in high demand. Property prices and rentals increase are among the highest in Karachi and increase by seven to 10% every year END_OF_DOCUMENT_TOKEN_TO_BE_REPLACED 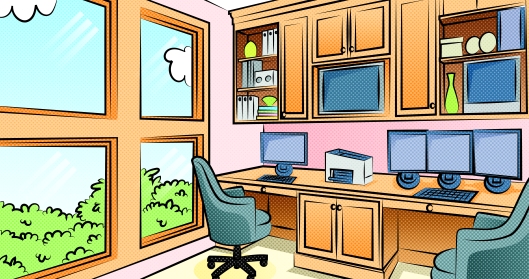 Working from home is emerging as a popular trend in Pakistan. Consequently, an increasing number of people are opting for home offices.

If you are looking to set up a home office, factor in the following to ensure aesthetics and efficiency:

Before establishing a home office, you will require legal permission from local authorities (e.g. DHA or LDA), because commercial activity within residential areas is often prohibited. END_OF_DOCUMENT_TOKEN_TO_BE_REPLACED 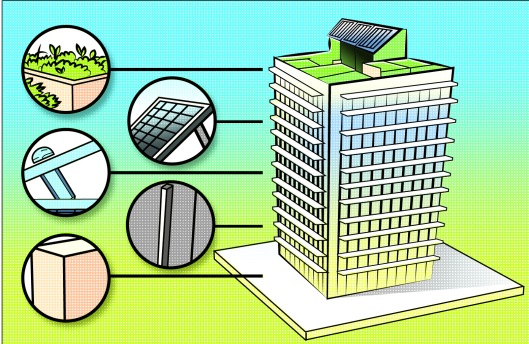 It is estimated that more than 70% of the world’s population will be living in urban areas by 2050. This has led to an increased global focus on ‘Green Urban Projects’ – high-performing structures that are designed, built and maintained in the most energy efficient manner possible.

The construction materials used in these projects include electromechanical, thermal and moisture-based products, double-glazed windows, solar panel roofing and improved energy rated appliances – all of which serve to improve the structure’s durability and efficiency.

The benefits of employing green construction practices include: END_OF_DOCUMENT_TOKEN_TO_BE_REPLACED 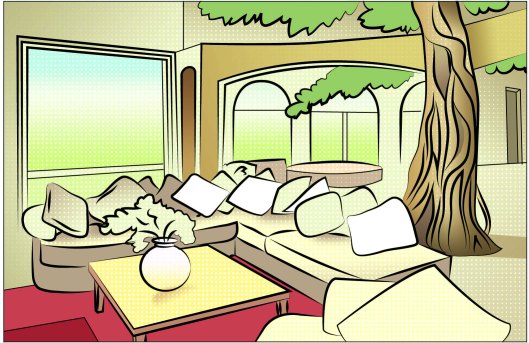 The term ‘Parlour Palm’ usually refers to that popular, small tree, botanically known as ‘Chamaedorea elegans’, often grown as a houseplant but – with an interestingly artistic twist – can be loosely applied to any species of tree – or bamboo – and cultivated as an integral part of home and office construction.

Including a living, growing tree, be it a bamboo, climber or other perennial plant in architectural plans is the green trend to follow. In fact, bringing the outdoors inside is an exciting environmental move that totally revolutionises the ‘green home’ concept. END_OF_DOCUMENT_TOKEN_TO_BE_REPLACED