Born in Karachi in 1935, Habib Fida Ali, who passed away on January 7, was among Pakistan’s foremost architects. He studied at the Architectural Association School of Architecture (AA) in the 1950s and was the first Pakistani student there. After returning to Pakistan, he worked with the American architect William Perry, before beginning his own practice in 1965.

In the years that followed, Habib Fida Ali became an icon in his own right; his work was visible across Pakistan and his portfolio included a diversity of buildings ranging from schools, mosques, offices, malls, hotels and residences, including the National Bank of Pakistan, the CAS School, The Forum, the Burma Shell Building and LUMS. Habib Fida Ali was also the recipient of several awards over the years for his work. END_OF_DOCUMENT_TOKEN_TO_BE_REPLACED

International Women’s Day (March 8) is a good time to acknowledge the achievements of notable women from around the world. One such woman is renowned architect Dame Zaha Hadid, who became the first woman to be awarded the Royal Institute of British Architects (RIBA) Gold Medal, the UK’s highest honour for architects last month. Although two other women – Ray Kaiser Eames and Patricia Hopkins – have been previously honoured, they were presented the medal in tandem with their husbands. END_OF_DOCUMENT_TOKEN_TO_BE_REPLACED

Houben won the Award for designing the £193 million Library of Birmingham (voted as the Building of the Year, 2013), with an amphitheatre, rooftop gardens and reading rooms branching out from a rotunda. For the jury, the piece de resistance that sealed Houben’s victory was the conception of the dramatic ‘Shakespeare Memorial’ on the rooftop, a gold–plated crown with a central opening to the skies.

END_OF_DOCUMENT_TOKEN_TO_BE_REPLACED

Few architects from South Asia have captured the attention of the world like Sri Lanka’s Geoffrey Bawa. Given that Earth Day will be celebrated tomorrow, it would be pertinent to look at some of Bawa’s most masterful works in his pursuit of ‘tropical modernism’.

Bawa initially studied law in London, and became a barrister in 1944. After returning to Sri Lanka, he worked at a law firm in Colombo, and purchased an abandoned estate in Lunuganga, on the outskirts of Bentota, planning to create an Italian garden there. After realising that he lacked the expertise to achieve this, he became an apprentice at an architectural firm in Colombo, and then went to Cambridge to study architecture. END_OF_DOCUMENT_TOKEN_TO_BE_REPLACED

With the 102nd International Women’s Day being celebrated globally on March 8, it is appropriate to pay tribute to the Japanese architect Kazuyo Sejima, one of the world’s leading purveyors of modern architecture.

Despite a long list of achievements to her name (which include winning the prestigious Pritzker Prize and being the first female architect to curate the Venice Architecture Biennale in 2010), Sejima unlike her contemporaries such as Zaha Hadid, shies away from the limelight.
As an article in The Japan Times recently noted, it is only in the last few years that she has “finally begun to emerge… and present the world with the tangible fruits of her amazing architectural vision.” END_OF_DOCUMENT_TOKEN_TO_BE_REPLACED

White is the most iconic colour in the world of design. It emphasises an attitude where the structure and its shape are of prime importance. It has therefore been an integral part of modernism, where the design ethic was famously summed up by Mies Van Der Rohe when he said, “Less is more”.

Although not all modernists devote themselves to a colour, Richard Meier, who celebrates his 50th year in architecture in 2013, is one of the world’s foremost architects to have furthered the modernist language while choosing to dress almost all of his designs solely in white.

Meier’s reputation is based on the fact that he draws inspiration from modernist masters such as Le Corbusier and Van Der Rohe. END_OF_DOCUMENT_TOKEN_TO_BE_REPLACED 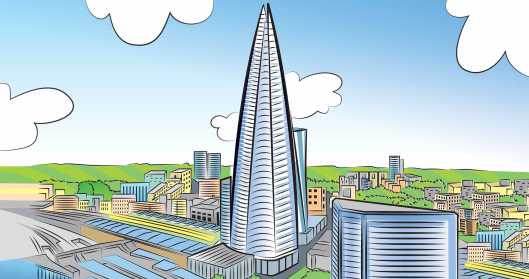 Born on September 14, 1957, Renzo Piano was always critical of tall buildings, claiming that they were merely an investment in one’s ego. This, however, has changed with the architect’s redesign of Southwark Towers in London. The Shard, a 1,016 foot tall structure, now stands in its place and is being touted as the tallest building in Europe.

Dressed entirely in 11,000 panes of glass and built on an irregular pyramidal base that tapers through the height of the building’s spire, Piano conceived of The Shard as a building that would combine public and private spaces and form an energetic and thriving community. END_OF_DOCUMENT_TOKEN_TO_BE_REPLACED

Frank Lloyd Wright, whose 145th birth anniversary will be celebrated on June 8, was one of America’s most acclaimed architects. The father of ‘organic architecture’, Wright believed in creating spaces that not only followed the forms of nature but were more natural than nature itself. For him, a building “should appear to grow easily from its site”; he was partial to open spaces with plenty of foliage and preferred using ‘natural’ colours such as beige and green.

Over a career that spanned 70 years, Wright designed 1,141 buildings; of these 532 were constructed and 409 are still standing.

Wright had a distinctive style which was dubbed ‘organic architecture’ and is reflected in all his work. However, the finest example of this style is a house called Fallingwater (1935), which is also known as Kauffman House. Located in rural south-western Pennsylvania, Fallingwater is considered to be one of the greatest masterpieces of the 20th century; it was built over a waterfall and the house looks like it is part of it.

Another fine example of Wright’s organic architecture is the Johnson Wax Building (1933-1936) in Racine, Wisconsin. The ceiling is held up with beamless ‘lily pad’ columns that were considered a structural marvel when it was built and remains an architectural masterpiece.

Wright also developed the ‘prairie style’ of residential architecture which set the precedent for what is known today as the open floor plan, where rooms, other than private quarters, flow into each other. It is a trend that is gaining momentum in Pakistan and it all began with the private home Wright designed in Chicago’s Oak Park neighbourhood. Soon, all his residential designs carried the trademark ‘prairie style’. Wright’s own homes, Taliesin (1911-1925) and later Taliesin West (which currently houses the Frank Lloyd Wright Foundation), are designed in the same style.

During his prolific career, Wright designed all kinds of buildings ranging from private homes to churches, synagogues and even a hotel in China, but his magnum opus is his final project. Completed six months after his death, Wright’s Solomon R Guggenheim Museum in New York is undoubtedly one of 20th century’s greatest architectural wonders.

First published in the Real Estate Section of The DAWN National Weekend Advertiser on June 3, 2012.

To commemorate Earth Day, which is being celebrated throughout the world today, it is befitting to talk about green architecture, a field that is growing rapidly given that the planet’s natural resources are fast depleting in the name of progress.

A significant aspect of ‘green’ – or eco-architecture – is the utilisation of recyclable and energy-efficient fittings. These include insulated double walls and roofs and recessed and double glazed windows. Another way to conserve natural resources is by using sustainable building material. For instance, in developed markets, wood from sustainable forests is now increasingly used for construction purposes.

Ken Yeang, the acclaimed architect, ecologist and writer, is known as the ‘father of green architecture’. During a career spanning over 40 years, Yeang has been the recipient of a host of architectural and ecological awards for designing several high-tech and eco-friendly buildings. These include The Human Research Institute and Menara Mesiniaga (Malaysia) and Solaris (Singapore) which is illustrated above. His current projects include Spire Edge (India) and the Great Ormond Street Children’s Hospital Extension (London).

In 2008, The Guardian chose Yeang as one of “The 50 People Who Could Save The Planet” stating: “Yeang uses walls of plants, photo voltaics [solar panels], scallop-shaped sunshades, advanced ventilation and whatever he can to collect water and breezes. The idea is to make buildings run as complete ecosystems with little external energy supply. He’s not there yet, but the possibility of the green skyscraper is developing fast as ecological imperatives filter into the consciousness of the startlingly backward world of international architecture.”

It is reassuring that in Pakistan too clients are becoming increasingly aware of the benefits of green architecture; many partially green buildings have been built and more are in the pipeline.

First published in the Real Estate Section of The DAWN National Weekend Advertiser on April 22, 2012.

To mark the 101st International Women’s Day (March 8), it is appropriate to pay tribute to the influential architect Zaha Hadid.

Born in 1950 in Iraq, Hadid completed her education at the Architectural Association, London, and began her career in The Office for Metropolitan Architecture. She became a partner in 1997; three years later, she started her own company, Zaha Hadid Associates.

Hadid’s designs were initially characterised as ‘radical’ and difficult to build because she employed the Deconstructivist style of architecture (which assimilates asymmetrical shapes or curves, a departure from the usual cubes and spheres found in traditional structures). Although she won numerous prestigious design competitions, her designs were not constructed until 1993, when a fire station that she designed for Vitra, a Swiss furniture company, came into being.

In the noughties, Hadid went from strength to strength, with outstanding buildings including the Hoenheim-North Terminus and Car Park (France, 2001), the Rosenthal Center for Contemporary Art (Ohio, 2003), and the Chanel Mobile Art Pavilion (in several cities including London, New York, Paris and Tokyo, 2006-2008). She recently designed the spectacular London Aquatics Centre for the 2012 Olympics.

For me, Hadid was always an icon; but I never really understood her work until I saw the BMW Central Building in Germany, which she designed in 2005.  An incredible concept, the factory and the office staff worked side by side, separated by a glass wall. Once you were in the office you could see cars being produced through the glass.

Over the years, Hadid has won some prestigious architectural accolades. These include the Pritzker prize (she was the first woman to do so in 2004) and the Stirling prize for architecture (2010 and 2011).

In 2010, Time called her “an influential thinker”; acclaimed designer Donna Karan, who wrote the tribute to Hadid, noted: “When I finally met Zaha, I found she personified her work. Strong. Sensual. Iconic… Zaha’s womanliness is what makes her designs so compelling. She brings a female sensibility and a goddess’s touch… Her style is legendary… and completely original. Zaha is a woman and an artist of her time – and yet she is very much ahead of it too.”

– Adil Kerai
The writer is an architect and partner, Habib Fida Ali Architects

First published in the Real Estate Section of The DAWN National Weekend Advertiser on March 4, 2012.