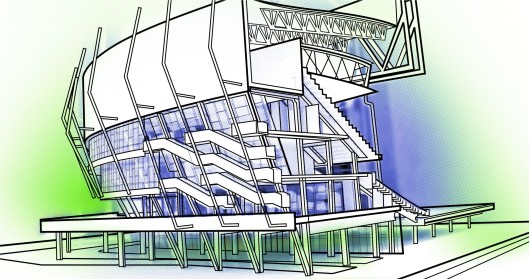 3D printing is one of the most fascinating technological advancements of our time. It has everyone from artists to scientists giddy with the limitless possibilities. 3D printers use materials (including resin, plastic and metal) to print 3D objects, ranging between six to 24 inches in height; smaller objects are usually printed separately, and assembled to create larger ones.

As far as architecture is concerned, 3D printing is used primarily to create scale models. This enables architects to achieve geometric accuracy, manipulate dimensions to enhance aesthetics and practicality, and save time in building miniatures that can be used as displays and as a point of reference during the construction phase.

END_OF_DOCUMENT_TOKEN_TO_BE_REPLACED 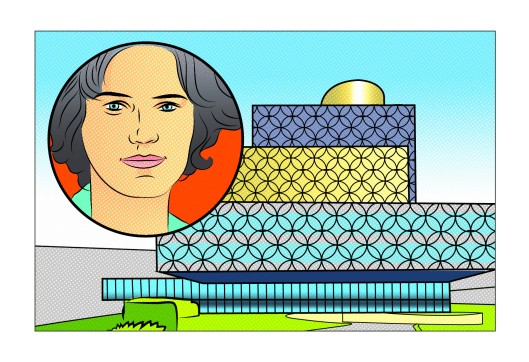 Houben won the Award for designing the £193 million Library of Birmingham (voted as the Building of the Year, 2013), with an amphitheatre, rooftop gardens and reading rooms branching out from a rotunda. For the jury, the piece de resistance that sealed Houben’s victory was the conception of the dramatic ‘Shakespeare Memorial’ on the rooftop, a gold–plated crown with a central opening to the skies.

END_OF_DOCUMENT_TOKEN_TO_BE_REPLACED 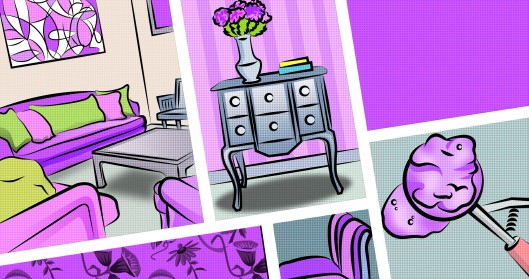 After crowning emerald Colour of the Year in 2013, Pantone recently surprised the design industry by reaching across the colour wheel to ‘radiant orchid’, as the colour of 2014.

This captivating hue is a harmonious composition of fuchsia, purple and pink, and while it lends itself well to fashion and décor, its feminine undertones make it a challenging colour to incorporate within the architecture of a house.

END_OF_DOCUMENT_TOKEN_TO_BE_REPLACED 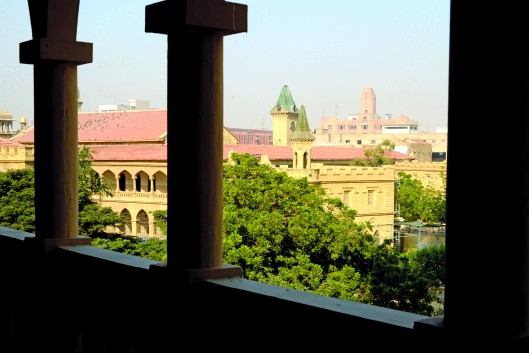 December 25 will mark Mr Jinnah’s 137th birth anniversary, so this is an ideal time to pay tribute to his alma mater, the Sindh Madresatul Islam, which Mr Jinnah attended between 1887 and 1892. 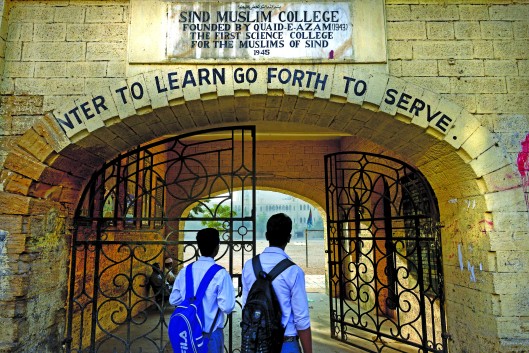 The institution’s vision is inscribed over the gateway

END_OF_DOCUMENT_TOKEN_TO_BE_REPLACED 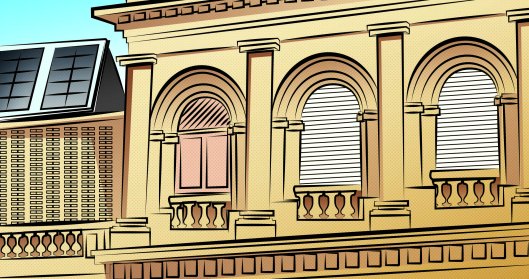 Retrofitting is the process of adding modern systems to older buildings to make them sustainable. As the structure of the building is not altered, retrofitting is ideal for heritage buildings, as well as older houses and commercial buildings that are not in good condition, but possess character and should therefore not be demolished as they form part of our cultural heritage.

In addition to the restoration and maintenance of the existing structure, retrofitting should also involve the application of techniques that conserve the amount of energy required to keep the building cool.

To this end, a number of ‘green’ techniques can be employed: END_OF_DOCUMENT_TOKEN_TO_BE_REPLACED 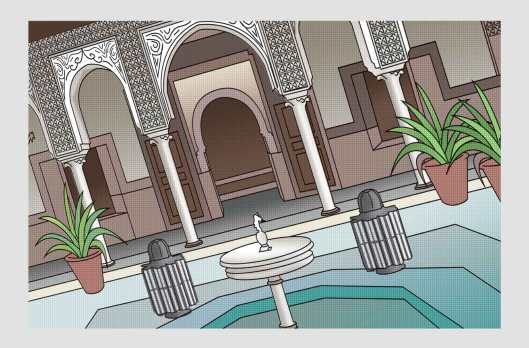 Have you noticed how many functions these days are hosted in spaces that are enclosed on almost all sides but open to the sky? From Bollywood scenes of haveli weddings, to book launches in Karachi, the courtyard is one architectural space that is certainly in fashion. END_OF_DOCUMENT_TOKEN_TO_BE_REPLACED 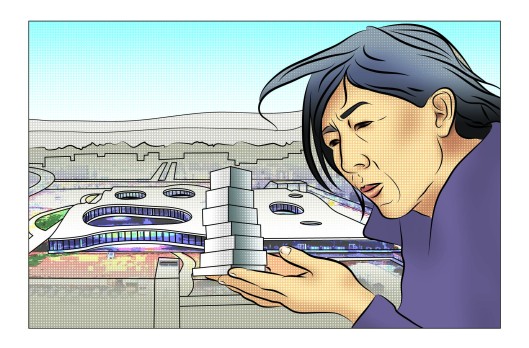 With the 102nd International Women’s Day being celebrated globally on March 8, it is appropriate to pay tribute to the Japanese architect Kazuyo Sejima, one of the world’s leading purveyors of modern architecture.

Despite a long list of achievements to her name (which include winning the prestigious Pritzker Prize and being the first female architect to curate the Venice Architecture Biennale in 2010), Sejima unlike her contemporaries such as Zaha Hadid, shies away from the limelight.
As an article in The Japan Times recently noted, it is only in the last few years that she has “finally begun to emerge… and present the world with the tangible fruits of her amazing architectural vision.” END_OF_DOCUMENT_TOKEN_TO_BE_REPLACED 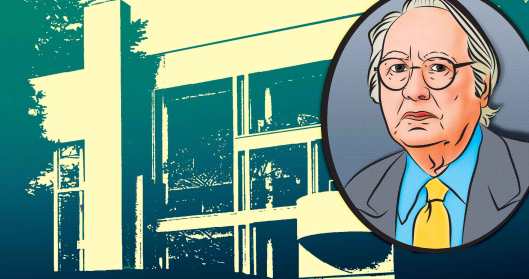 White is the most iconic colour in the world of design. It emphasises an attitude where the structure and its shape are of prime importance. It has therefore been an integral part of modernism, where the design ethic was famously summed up by Mies Van Der Rohe when he said, “Less is more”.

Although not all modernists devote themselves to a colour, Richard Meier, who celebrates his 50th year in architecture in 2013, is one of the world’s foremost architects to have furthered the modernist language while choosing to dress almost all of his designs solely in white.

Meier’s reputation is based on the fact that he draws inspiration from modernist masters such as Le Corbusier and Van Der Rohe. END_OF_DOCUMENT_TOKEN_TO_BE_REPLACED 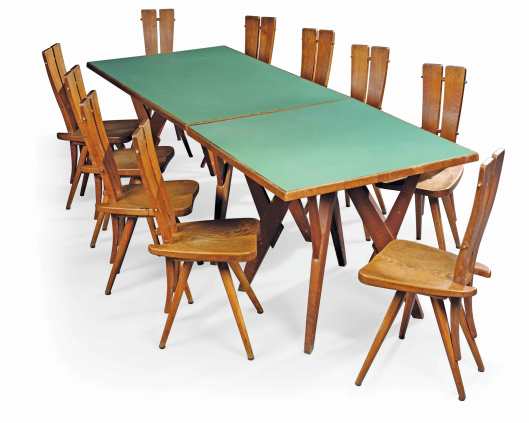 Carlo Mollino (1905-1973) was one of the most strikingly original creators of 20th century Italian architecture and design; his few remaining works are largely preserved in international museums and private collections.

Born in Turin, the son of the region’s most prominent engineer and architect, Carlo Mollino produced a spectacular portfolio of work including domestic commissions for resorts, hotel interiors and commercial developments from the late 1940s until the mid-1950s.

The furnishings of Casa Cattaneo, 1953, are one of Mollino’s most important domestic commissions. Constructed in the foothills of the Alps, the Casa Cattaneo endures as a unique and complete surviving expression of Mollino’s distinctive architecture and interior design.

This stylish dining suite was the central focus of Luigi Cattaneo’s extended family gatherings. Constructed of oak and chestnut, the dining table was designed with an
under-structure that responded to the villa’s beams and buttresses. Surrounding the dining table was a suite of visionary chairs, carved from chestnut and secured by brass bolts that corresponded to the wall panelling.

First published in the Adbuzzzz Section of The DAWN National Weekend Advertiser on October 21, 2012.

Vidal Sassoon isn’t just a brand name; he was in fact a real person, a hair-products tycoon and above all, an iconic hairdresser whose prolific career spanned over half a century.

Sassoon revolutionised hairstyling; he made sprays, backcombing and beehives redundant by introducing his ‘wash and go’ styling philosophy and the no fuss, easy to maintain ‘bob’ cut.

An architecture buff, Sassoon’s hair styling philosophy was inspired by the Bauhaus movement and is all about geometric and angular shapes without the fuss and fluff. The quintessential modernist, Sassoon’s aesthetics reflected in every aspect of his life from his hairstyles to his homes which are all partial to straight lines and clearly discarded superfluity.

The Los Angles house where Sassoon and wife Ronnie lived is a testament of the couple’s love for architecture and modernist design. Known as the Singleton House after its original owner, the house sits on over five acres of land on a Bel Air hilltop. It affords spectacular views of the Pacific Ocean, the glass and steel skyscrapers of downtown Los Angeles as well as the desert and San Gabriel Mountains.

Designed in 1959 by modernist master Richard Neutra, the Sassoons’ renovated the house when they moved into it in 2004, but stayed true to the architect’s original vision. They retained many of the built-ins (such as kitchen cabinets and bedsteads) and matched materials and fixtures.

Decorator Martyn Lawrence-Bullard helped with the interiors, which now includes original mid-century furniture by Italian architect Gio Ponti and French designer Charlotte Perriand. A Saarinen Tulip table by Knoll (an embodiment of modernist design theory) is the centrepiece of the kitchen which has views of the pool and spectacular vistas beyond.

The house is accented with art by modernists such as Lucio Fontana, Étienne Hajdu, Anish Kapoor and Ellsworth Kelly. The four-bedroom, five-bathroom house is valued at about $15 million.

Vidal Sassoon died in his beloved Bel Air home last week at the age of 84.

First published in the Adbuzzzz Section of The DAWN National Weekend Advertiser on May 20, 2012.