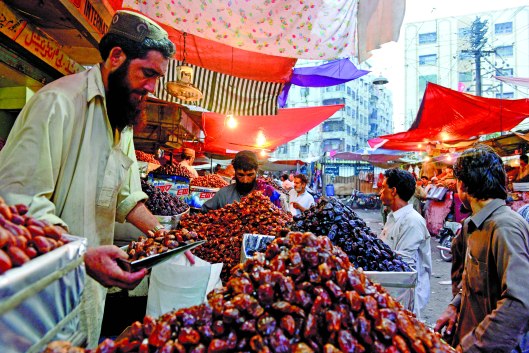 Located in Saddar and accessible via Napier and MA Jinnah Roads, the bustling Khajoor Bazaar offers home accessories and foodie options – in addition to its specialty – juicy, mouth-watering khajoors for weddings, parties, and of course Ramazan and Eid.

A world of dates… Visitors have to navigate narrow, winding lanes, packed with makeshift stalls set up on pavements in front of shops to find what they are looking for. As its name suggests, Khajoor Bazaar’s main attraction is its dates, and is reputed to be Pakistan’s largest wholesale date market. Dates on offer include Aseel, Begam Jangi and Dhakki, from Balochistan, Dera Ismail Khan and Sindh respectively; imported varieties from Iran, Iraq and Syria are also available. Ajwa dates – high-end, premium quality dates from Mecca and Medina – are available these days, since Ramazan is around the corner, and people are willing to splurge on them. END_OF_DOCUMENT_TOKEN_TO_BE_REPLACED

If Lyari wasn’t the battleground it has become, Kakri Ground would be the home of football in Karachi. Instead, the National Coaching Centre (NCC) has become an alternative for anyone wishing to put on some cleats and play football – or any other sport.

City Central…Located in Block 14, Gulshan-e-Iqbal, the NCC is easily accessible from all parts of Karachi via some of the city’s largest thoroughfares; Dalmia Road connects it with Gulistan-e-Jauhar, Karsaz Road with Shahrah-e-Faisal, and the Aga Khan Road with all areas near Jail Chowrangi. 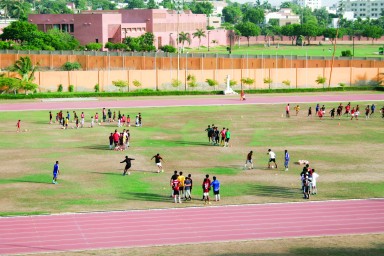 Where sport lives… In full view of the National Stadium, the NCC houses a full-sized football pitch, fully equipped gymnasium, badminton, squash and tennis courts, as well as track and field facilities. Some of the facilities might not be world class, but the fact that they exist allows a lot of people to come and train there.

What you will see… The NCC is open to public membership, and attracts people from all walks of life who have a passion for fitness and sport. On any given day, you can watch players on the football pitch, health conscious athletes sprinting on the tracks or big-armed fitness buffs pumping iron in the gym.

For the not so sporty… The area around the NCC has several shopping options. The pocket which houses Time Medico (a supermarket) also has a number of bookstores and cigar shops. Mashriq Centre, considered to be Gulshan’s answer to Zainab Market thanks to the apparel available there (as well as art supplies), is a popular shopping venue.

Take a foodie break… Have a burger and milkshake at the nearby McDonald’s; and if you are looking for barbecued protein, venture over to one of the many sajji and barbeque joints in Block 14. There is a Hobnob Bakery across the road from the NCC and a Pie in the Sky nearby to give you a sugar fix and make up the lost calories.

In a nutshell…. The World Cup would be a stretch, but a view of the NCC and its adjoining areas while coming off the Stadium Bridge could convince anyone that the Asian Games or a smaller event could certainly be held there. No multi-million dollar construction would be needed, just a little maintenance would do the trick.

First published in the Real Estate Section of The DAWN National Weekend Advertiser on June 10, 2012.