Of all the parks in Karachi, Bagh Ibn-e-Qasim (The Garden of Ibn-e-Qasim) might be the most regal and well kept. Named after the Arab general who conquered Sindh, it lies opposite Park Towers in Clifton, an expanse of perfectly trimmed trees, sprawling lawns aflame with deep red roses and yellow marigolds.

The Jehangir Kothari Parade and Bandstand overlooking the park

The Park begins from the Jehangir Kothari Parade and ends at the Arabian Sea. Saunter to the stairway a few paces from the Bandstand and you will be greeted with what the Mughals would have called a pairi-daiza, or firdous – a garden meant to represent paradise with an endless number of lawns neatly organised into grids, combining all the elements they found most appealing in nature.

Many people who visit the Park sit along the Lady Lloyd Pier which begins from the Parade and runs through the park, lined on both sides with short walls shaped like the rooks on a chessboard. This is where they sit for a while and ponder like Rodin’s Thinker, undisturbed, until the stone seat starts to ache. 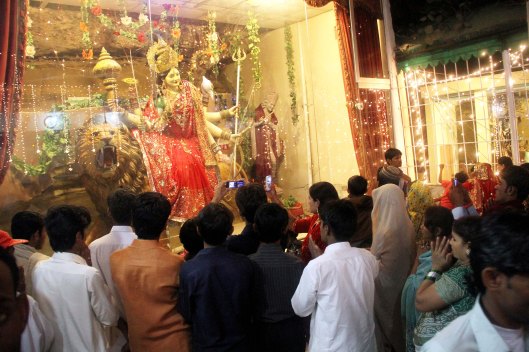 Worshipers at the Hindu Temple

Although this may have been inadvertent, the Park, in a way, exemplifies an excerpt from the Lahore Resolution which was officially adapted on Pakistan Day (March 23): “That adequate, effective and mandatory safeguards shall be specifically provided in the constitution for minorities in the… regions for the protection of their religious, cultural… political… and other rights…”

Ultimately, the serenity that can be found – among perfectly sculpted ledges, parapets and stone canopies – is the Park’s biggest appeal. So if you are in the mood to explore 20th century attempts to revisit and revive Mughal architecture, then Bagh Ibn-e-Qasim is a landmark not to be missed.